I have had my issues with The New York Times, including its employees, with regard to people with cognitive challenges and Down syndrome, in particular.*

This week I only have love for The Times. On three occasions this past week they not only got it right with regard to people with Down syndrome, they set the bar on how to do it.

The first came December 1st, from Lawrences Downes, of the paper’s Editorial Board, on the Opinion

Downes wrote about Judith Scott, a deceased artist, who has a current show at the Brooklyn Museum of Art. She also had Down syndrome.

An Artist Who Wrapped and Bound Her Work, and Then Broke Free is a masterful piece on art, disability and civil rights. If it were possible to win an award for one sentence it would be this one:

“Sometimes, rarely, one among them hits the cosmic lottery and breaks through on her own.”

Downes is poetically reminding us we are dismissing a multitude of human potential because we simply do not believe these people capable of anything.

Cotter’s powerful review of Ms. Scott’s exhibit is predicated on the assumption she is an artist with an intended vision rather than a person who is accidently creating art. His one sentence award would be for proclaiming that:

“…Ms. Scott emerges as the complex and brilliant artist and person she was.”

My jaw dropped. When has anyone– with authority– ever said a person with Down syndrome could be “complex or brilliant”? As an art critic, Mr. Cotter was simply giving his expert opinion but in doing so he is challenging a world-view that demonstrates otherwise. 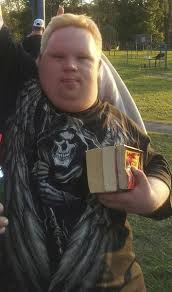 The author correctly drew a comparison between the death of Eric Garner with that of another death not so widely known:

“Mr. Garner’s death recalls a similar tragedy involving a less familiar name: Robert Ethan Saylor, a 26-year-old man with Down syndrome who was killed last year in a struggle with three off-duty county sheriff’s deputies at a movie theater in Frederick County, Md.”

The gravity of this observation is that in a world where people with Down syndrome are mostly excluded from participation we are forced to realize that inclusion unfortunately also means they are over-represented as victims of violence.

I invite you to not only go read these pieces immediately if not sooner, but share them widely. This past week at The Times was one in which people with Down syndrome were acknowledged as belonging in our world. This is so exceptional anywhere in the world it bears a legacy.

I have been fortunate to get positive response from my concerns: Chuck Klosterman’s response to my letter and Readers Protest ‘Hate Speech’ in Comments Section on Down Syndrome.