Almost a year ago Thorin told me: “Boyfriend, please.” He wanted a friend who was a Dude. This will please Bubba, gone now almost 6 months– I prayed for Thorin to find a boy who could be a friend.

In January, 2016 I was waiting for Thorin’s theater class to end at The Children’s Museum and Theater of Maine (the most amazing place in the universe by-the-way). I saw a young, very young woman, standing next to a boy who looked to have Down syndrome. I broke all the rules I find annoying:

“Hi! Say, does he have Down syndrome?”

“Awesome! Are you his mother or something?” (It is clear she would have had him at 10 if that were true.)

“My son looks about his age–9? He has Down syndrome.”

“Do you think…um…we could get together for a play date?” 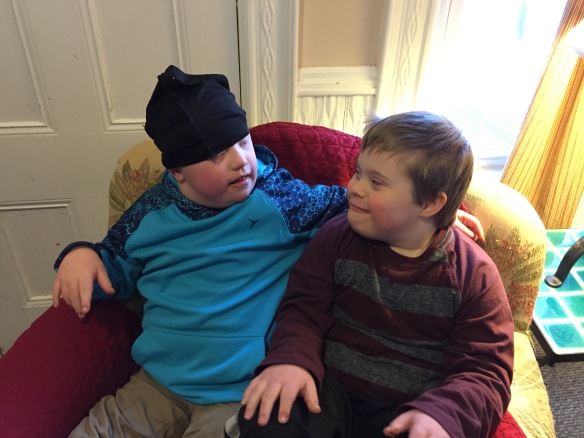 For the next almost year Thorin and I have gotten together almost every week with Caleb and Hannah.

He and Caleb have a secret language. They bust each other’s balls. They talk about farts. They are boy friends.