My mother, Thorin’s Bubba is living with us following a hospital stay. She was with us for a month in February after she passed out in a restaurant. Bubba has not had a great 2015: she has been hospitalized 7 times arriving each time in an ambulance. Most stays were for congestive heart failure and the remaining from a broken rib from a fall and a surgery to have a defibrillator implanted. She has also had 3 separate stays at a rehabilitation facility. There have been countless doctors visits. 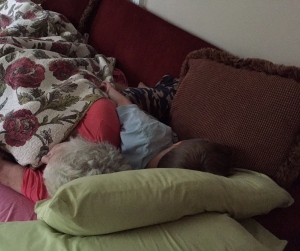 When I reminded her she has not had a great year her response, demonstrated her indomitable Midwestern spirit: “Think of it this way, I pulled through all those times.”

Bubba moved here to Maine in August, 2012 to be near Thorin, her only grandchild. She was 81 years-old and had lived in her small city in Wisconsin since birth.

Thorin and Bubba are grandmother and grandson but they are also friends. For more on that: The Thing With Two Heads and Sea Change.

Since Saturday, Thorin has kept a close eye on her. I found him sleeping with her when I went to check on him during the night.

Upon waking to her stirring he told her: “Bubba, walker!” He wanted to make sure she didn’t just walk out into the kitchen.

He is her quasi-physical therapist demanding she walk around the apartment based on instructions from the actual PT : “Bubba, come on!”

I told him it was up to him, she would not listen to me. He said: “Right.”

This afternoon we all sat outside reading. It was so beautiful and nice and regular. We need regular right now.