“I am large, I contain multitudes”

Last August when we started on our journey of home schooling I asked Thorin what he wanted to learn. Without hesitation he said: “Ballet”.

I remembered a brief obsession with the dance documentary “First Position” but other than that I couldn’t account for his answer. Through a friend I found a dance school.

The class for his age group was a combination ballet, tap and jazz. I asked Thorin if that was acceptable. He jumped up and down yelling: “Yes, yes, yes!”

I stared at him wondering what else didn’t I know about my own son. I didn’t press for answers. I had made enough mistakes trying to understand his process with his photography.* He knew what he wanted. The WHY of it wasn’t any of my business.

I told him he would be the only boy in the class. “Okay”.

Every Monday night Ward took Thorin to dance class. Thorin left excitedly with his jazz/ballet and tap shoes in his backpack. He wore black leggings and a matching shirt. They were reluctantly covered by sweat pants and various Avenger t-shirts. When he came home he insisted on wearing his dance clothes the rest of night even sleeping in them– he looked as much like a cat burglar as he did a dancer. Every day he danced—tapping across the kitchen floor, hip shaking jazz routines and pliés followed by a little jump. I was an enthusiastic audience who maintained a respectful distance.

On ‘American Idol’ nights Thorin did elaborate dance moves during the performances using the music and singing as his score. He was entertaining and was a welcome distraction to the unexplainable power and rise of Rayvon Owen over Quentin Alexander, Joey Cook and Tyanna Jones.

In March he came back from class with his dance costume for the May recital. He asked to wear it for Idol. In my mind’s eye I saw him painting in it, playing baseball in it—destroying it. So I hid it. I distinctly remember saying to myself as I placed it in it’s hiding place: “Why am I putting it here? I never put things here.” Then I answered myself: “This way you will remember!” But in reality I promptly forgot. More on that later.

Ward and I were not convinced Thorin would go through with the dance recital. He took theater during the same period. The classes were in 3 week cycles each with a new mini-play. He loved the class but each time, five minutes leading up to the performance for parents he bailed preferring to sit in the audience. It didn’t bother us because it didn’t bother him. The  theater teacher was philosophical about it: “For him it’s the journey”.

The two weeks leading up to the recital I took Thorin to dance class. I had never even seen the place. Thorin had to tell me what street to turn on, where to park and what door to go in. I learned a little something about myself in those two nights: I was not as serious as the other mothers about dance and I was the only one in the history of the school who lost their kid’s costume. 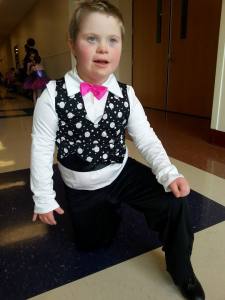 When I confessed to the owner I had lost it I also said: “I am not convinced he will go through with the recital in the end”. She said: “Miss Alivia has a 100 percent success rate with recitals. Plan on him following through. Buy black pants, a white shirt and a pink bow tie.”

I was ashamed I had considered he might not follow through and I was anxious at the thought of having to find a pink bow tie.

I did find the costume after tearing the house apart twice. Thorin advising me along the way: “Slow down. It’s fine”. And he would happily wear his : “Hulk costume”.

Thorin’s  did go through with the dance recital, securing Miss Alivia’s 100 % rate. As we watched from the audience I saw how composed Thorin was. He gave us a quick wave but his focus was on the audience as a whole. I saw he was not doing this for us– it was for himself. For nine months he had prepared to perform something he loved doing. 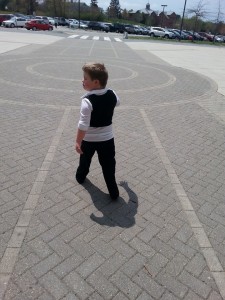 I was crying because at eight-years-old Thorin had figured out something I didn’t learned until my 30’s: Do what you love for no one else but yourself.

My guess is the greater part of parenting is not getting in the way of your child becoming who they are.

* For other posts on Thorin’s photography:  POV, Shutter Bug,Warholian Selfies, T’s Photos of Sally’s Garden  Picture This, Portrait of an Artist as a Young Boy and Typical Images from 45 & 68 Inches.

Reprinted on: Huffington Post and The Good Men Project

16 thoughts on “What I Learned About Dancing From My Son”