A month a ago Ward and I made the very painful decision to have Walt our beloved 15 year old German Shepherd put to sleep. He had been struggling with degenerative myelopathy for years. It progressed to a point where he was unsteady, falling and failing. We could have waited until he fell and broke a hip or a leg then the dreadful decision would have been out of our hands. Or if not that until his back was completely paralyzed. We decided pain, trauma and crisis was not what Walt deserved in the end. Walt had earned the right to a peaceful death.

We adopted him almost ten years ago. He had been found tied to a tree. His previous owners—clearly not family—had his teeth filed to nubs. Whatever they did to him during his life must have made him want to attack them. He lived in a shelter for almost four months. He was taken home by another family for just 24 hours only to be returned for his sullen nature and angry disposition. The shelter staff loved him but his time was running out. When Ward and I first met him we saw something other than a lost cause. His face for a five year old dog was that of a puppy. He didn’t look angry to us but haunted. His sullenness read as beaten-down.

A few things about our dear Walt—

The first time we left Walt alone in our house he broke into the cupboards: he ate one pound of licorice, a box of tea and a box of spaghetti. He emptied the garbage on the floor and ate the entire contents. We had to put the garbage up and locks on the cupboards after that. He grew out of that habit about 5 years in.

Walt loved moving rocks on the beach. Not little ones but big 10 and 20 and 30 pound rocks. He would do that for hours if left to his own devices. We would usually call a halt after a half hour or so and then he would run on the beach for another hour.

Walt in the zone

He was for many years an avid tether ball player. People would come out of their houses to watch and cheer. One even videotaped him. His court was on the grounds of a private school in our neighborhood. He was even written up in their newsletter for his athletic prowess. He was so skilled I sent a video of him playing to American Funniest Home Videos. I was convinced we would win the $10,000 prize thus assisting us in needed funds to adopt internationally– a child this time. We got a contract but he never made it on the show.

His best animal friend was Coco a mini dachshund who is still with us. They were a comic duo on any street we walked. The disparity in there sizes often commented on. Once a dog on the loose tried to attack Coco. In one fell swoop Walt jumped over the dog’s back to end up in front of Coco. He didn’t bark or growl or bare his nubby teeth. He just stared at the dog until the dog ran away.

Strangers would ask if Walt was a puppy because of his sweet, gentle face.

Walt loved children. On walks by playgrounds or schools he would pull to a stop so he could watch them play and run.  We wondered if there had been a child in his life that he missed. Maybe someone in that house he lived before loved him.

Walt had a rivalry of sorts with a squirrel. This squirrel would run in front of him on walks. Walt would go crazy trying to get at him. It took all my strength to hold him with the lease. This damn squirrel starting following us on walks. Sometimes he would be on the other side of the street baiting Walt. Once Walt did pull away and took after the squirrel. I ran after Walt yelling like crazy. The chase ended with the squirrel on the other side of a metal gate with Walt and I on the street staring in. The squirrel stood up on two legs and leaned against a tree with one of his paws on his hip –I shit you not. “That is one crazy fucking squirrel” I said. Walt looked like he was laughing. He knew he had been bested. A few weeks later the squirrel vanished and Walt looked for him for days.

Years later Walt did catch a squirrel in our backyard. Ward yelled. The squirrel screamed. Walt observed his prey briefly before letting it go unharmed. The squirrel ran up high into the tree. Maybe Walt took pity thinking about his old rival.

Walt liked Harry Potter books. When my sister dog sat for us she would read him Harry Potter until he fell asleep.

Ward and I had a nickname for him: Badger

Walt was an escape artist. I used to take him to work on the weekends. My office was in the basement of the library. I left him to go get a cup of tea. As I was standing talking with some co-workers I heard someone say: “Look there’s a German Shepherd!”. He had figured out how to open the door to the hall, run up the stairs and trigger the handicap button to get into the library.

He absolutely hated having anyone touch his feet. And for a few years his face, too.

We had a ghost that scared Walt. This ghost mostly walked around the first floor at our old apartment while we were in bed. It annoyed me but it frightened Walt. He would hide or whimper. Ward claimed he never heard it. One night though Ward, Walt and I all heard the same thing: someone walking around on the first floor. Ward whispered: “There is someone down there!”  Walt started whimpering. I had had enough. I dashed down the stairs yelling: “Stop scaring my dog you GD Spirit!”. Ward and Walt soon followed.  After when Ward was convinced no one else was in the house he admonished me: “Kari, you should’ve waited for me. You didn’t know what was down here.” “That thing needs to stop scaring Walt” I countered. And it did stop after that night.

I knew Walt accepted me completely when he walked in the living room and leaned against my legs and put his head in my lap. He had lived with us three years the day he did that.

Walt loved car rides. He would sit and stare out the window smiling at everything that went past his field of vision. I would drive us both around the city. I was taken with how peaceful he was doing this little nothing thing I took for granted. We took he and Coco from Maine to Wisconsin for a family trip. He sat for hours staring at the landscape changing while Coco slept, I read and Ward drove.

Walt loved to curl up with Coco on the floor, the couch, the bed, out in the yard and on the porch.

Walt worshiped Thorin. When Thorin came on the scene he became Thorin’s dog. The great thing about a boy and his dog is that the dog becomes part of the boy. 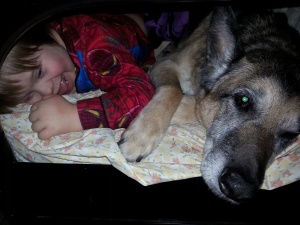 Thorin couldn’t walk when he came to us but he would hold on to Walt and maneuver his way around the house and even up the stairs.

Once Thorin left the house without my knowledge but he wasn’t alone. For more on that adventure please read:

What’s That, Lassie? Timmy Fell Down The Well?

Thorin’s imaginative play often included Walt. He would make a fort for the two of them and fight bad guys. In the last few months Walt’s role became more subdued. The fort had a bed for Walt to cushion his back and legs.

As Thorin grew in strength and ability Walt’s declined. They both adjusted.

Walt’s adventures were behind him. We had a bed for him in every room. Our floors were covered in blankets and towels so he wouldn’t slip and fall. His falling was our fear. A week before he died he went down on a walk. Thorin and Coco stayed close. I tried to carry Walt but he wouldn’t let me pick him up. He growled which was a sound I hadn’t heard from him in years. He looked at me saying something like: “I’m sorry. I just have to do it myself.” He crawled home.

Walt would have went to the bitter-end happily to stay with Thorin. 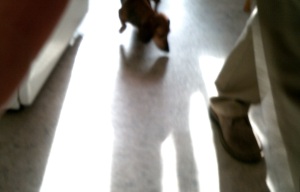 Living beings have complicated lives: the first one is when we are born perfect and filled with our

Walt was Walt the dog because everyone confused his name with Ward the husband:)