Our kid turned seven. Or as my dad (and perhaps George Costanza) would have described it – T. had his Mickey Mantle birthday.

A month or so before his sixth birthday T. and I were watching one of our favorite TV shows – The Dick Van

Dyke Show. In the spirit of full disclosure I have a mad crush on Dick Van Dyke which may or may not have unduly influence my decision making skills.

Laura (Dick’s wife for you unfortunate souls who do not know the show) threw a surprise party for Dick’s birthday. T. loved the episode all five times he watched it. Therefore, I thought we should throw him a surprise party! And – while we are at it make it a costume party!

It was a cinch getting him into a Thor costume before we entered the apartment. He dresses up like Thor a few times a week. I just pulled the costume out of my bag and said, “Wanna put this on?”

We walked through the door and seventeen people in masks yelled, “Happy Birthday!”

It hit me suddenly.  It’s like I forgot about the fact he has sensitivity to loud noises and crowds. Yes, I am a horrible, horrible mother.

He didn’t say a word. He marched into the den which is where he stayed for the rest of the party. For the next six months he would sneak up behind me; unexpectedly fly through the bathroom door; or, stand next to the bed in the middle of the night and yell “SURPRISE!” Message received.

This year would be different. No old school TV sit-com shenanigans necessary. I would be Martha Stewart-like. The invitation offered ART, PIZZA and CAKE! 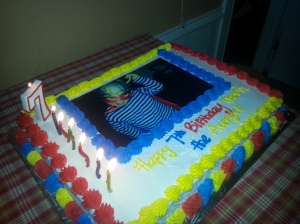 I found a fun art project! I visited our local art store around the corner. A very nice art student with dreadlocks helped me come up with a crafty project. Pre-made papier mâché animals and a array of paint, googly eyes, sequins, mini pom poms and glitter glue. A time killer and a take home prize!

Thorin took a positively controlling interest in his cake. Unheard of behavior. I asked who he wanted on the cake, “Hulk? Thor? Who?”

“You want you on your cake?”

He picked the photo and the text and CHOCOLATE WITH VANILLA FROSTING.

There were relatives including a sister, an uncle, a couple aunts and three grandparents.

Each gift was something that was perfect for him and most were wrapped in his favorite color yellow. These people knew him.

There was one dicey moment. T. was opening his gifts he looked up saw a crowd. He turned to me, “Bye. Go. Now.”

I looked up at everyone, “He wants to leave.”

Someone brilliant said, “Let’s go outside.”

It was an unexpectedly beautiful, sunny day.

A good time was had by all.