October is National Down Syndrome Month. The goal for many parents who blog and have a kid with DS is to blog everyday about DS. I haven’t had time to blog about anything in a while so I will cut myself some slack and blog when I can.

Some things I learned this first week of National Down Syndrome Month:

1.   My sister told me to watch this new show called The New Normal – episode three in particular. In this episode there is an adult man with Down syndrome who is a high-maintenance juice bar customer, sort of angry, totally homophobic and he belongs to a gym. Yay! for a character with DS who isn’t happy all the time and who makes other characters in the show appreciate the good things in life because of their simple, simple ways.

What I want to see – a show with a menacing, coke-snorting, pimp who happens to have DS. People with DS are not all the same – just like the rest of us.

Ryan Murphy one of the creators of the show also does Glee and American Horror Story – all three shows employ actors with Down syndrome who play not your typical person with Down syndrome. Thank you, Mr. Murphy for helping to take my kid out of the “Happy Meal Box”.  Check out this story about actors with DS who are making a difference 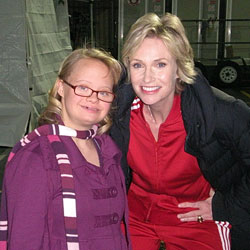 2.   I was in the Target checkout line with my sister, Betty, and Thorin when I saw a young man with Down syndrome and his girlfriend who was A Typical. Like in “Normal”.  (Or “looks normal” but really “has something”?) This blows my mind. Really, did I just see that? Ryan Murphy, are you reading this because it might be the next big thing.

It took me a while to see he was a big, good-looking guy and she was this petite, cute girl. And – that’s all they were. Or is it? Ward is convinced I’ve mistaken their relationship. Did I? Does it matter? It’s like Guess Who’s Coming To Dinner? Or it isn’t. Maybe he is her pimp.

3.   At a restaurant we noticed a girl who looked to be six or seven with Down syndrome. When Thorin and I went to the bathroom the mother was there with one of her other children. She said, “Oh, Hi!, my daughter noticed you!” pointing to Thorin.  “She said there was a little boy here with Down syndrome and here you are!”

I was thinking,” Why are you pointing at him and saying the words, ‘Down syndrome’?” I wanted to say, “Don’t say that – he doesn’t know that – yet. “

My belief  (rightly or wrongly) is Thorin doesn’t know he is different because we haven’t told him.

My response took me by surprise. It shook me. It still shakes me. 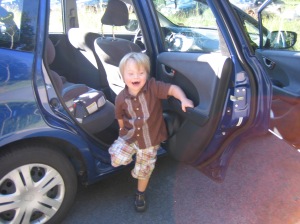 I wanted to ask this mother how her daughter knows that is part of who she is. Did her daughter ask? Did they decide to tell her? Worse did someone say something?

How will I tell our son about this little square world we live in?

9 thoughts on “This Little Square World –”