Last month, Ward came back from a trip – and flying through D.C. he bought a gift for Thorin at the airport. It was a baseball cap that had “Future President” stitched above the bill. When Thorin pulled it out of the bag and threw it on I was a little something – can’t really pinpoint it here. I think my mouth might have been open and my head cocked to one side and I might have been thinking WTF?

I admit I wondered what people would think when they saw a kid with Down syndrome wearing that cap. Later in the week, I even wondered what his teachers thought at school when he was wearing it. I even wondered if one of them gave me a strange look like, “Is this some kind of joke? Some kind of sick joke?” “You’re a $hitty parent!” I thought a lot about it and what I was thinking about it.

And – then I three epiphanies:

Whenever Thorin goes to a new provider, doctor, etc. I relay all information to Ward that evening about what The New So-and-so said about T.’s health, development, social skills, speech, hearing, etc., etc., etc. Ward listens patiently and always, always, always asks, “Did they say anything else?”

This question I learned is code for did they say “What an amazing person he is”. It has been the rare individual who doesn’t remark on our remarkable son and when that happens Ward tries to figure out what deficit resides in this soulless human.

It wouldn’t occur to Ward not to buy a baseball cap with Future President on it for Thorin. 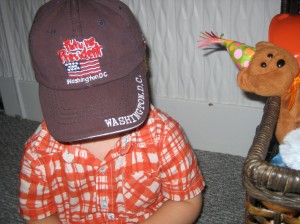 I bet they sell thousands and thousands of those hats each year and not one of those kids is going to become the future president – especially the girl ones.

Sometimes a hat is just a hat.