In the 90’s Helen Hunt and Paul Reiser co-starred in the sit-com Mad About You. It wasn’t like I was a huge fan but there is a scene that sticks out as memorable because it was so true and so funny to me. Hunt’s character is lamenting the fact her mother is coming to visit and how stressful it will be because her mom really knows how to push her buttons. Reiser’s character says something to the effect, “Sweetheart, of course she knows how to push your buttons, she’s the one who installed them.” – insert laugh track. 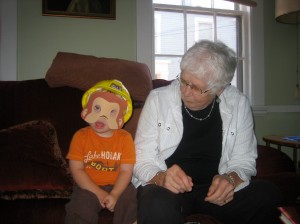 My mother still pushes my buttons. And, to be fair I push hers. To most of my friend’s my mom is viewed as funny, sincere, smart – even wise. I get that she is all that but she also makes me nuts. And – I her. She is my Debbie Reynolds and I am her Albert Brooks from the 1996 Brooks directed film, Mother – which if you haven’t seen it you should.

Since T. though there has been a profound change in the nature of our relationship. Don’t get me wrong – we still argue and we still make each nuts. The change is we both absolutely love the same person with such intensity that that love makes us aligned in a way we never have been. Also, who we are to each has been re-defined. My mom is a grandmother now and I am a mother now.

The first four months T. lived with us I had to take him to weekly-supervised visits with his biological mother at the Department of Health and Human Services building. I would drop him off with a caseworker who waited in the lobby and pick him up 90 minutes later or an hour later or 45 minutes later – or, whenever his mother got tired of hanging out with him. He was technically in re-unification status and there was a chance he could be taken away from us.

I started calling my mom to pass the time before I went back to get him. Sometimes we talked about where he was and sometimes we just talked about anything else but that.

The relationship my mom has with T. is very different than my relationship with her. They are buddies – almost weirdly peer-like. They get each other. They laugh a lot. They have little jokes. They think the other is perfect. They do not disappoint each other.

And – I know I will never have that relationship with my son because I am the mother.

Most of the time I was growing up my mom worked and then came home and cooked and cleaned for 5 other people. She had two kids that didn’t just get sick but were sick kids. She worried about money. She was tired.

I had never really thought about how any of that changed her until T. 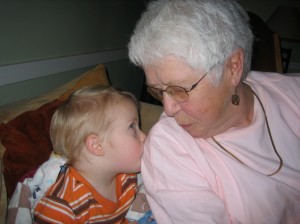