I’m a pretty modest person, sometimes awkwardly so. There is no compliment that comes my way that I won’t deflate or deflect with a self-depreciating remark. I’m sure if T. were the fruit of my loins, I’d find some way to duck the kind words thrown his way. Maybe I’d admonish the person for giving T. a big head or quickly change the subject.

Maybe I wouldn’t. Who knows? Because I don’t. If someone notes how good looking he is, I say, “Isn’t he?” or “The cutest ever.” Because I didn’t have anything to do with his looks, I’m free to let him glow without feeling like I’m trying to soak up the reflection.

As my wife mentioned in an earlier post, we had some trouble finding the right school for T. The place that was first recommended was not a good fit and we’re still kicking ourselves for not being more assertive when we began to realize it.

The first hint came before he even started attending. We had toured the facility and went to an office to discuss the particulars. There was some small talk and the first subject of small talk when it comes to T. is how cute he is.

My wife said something like, “Oh I know. We’re going to find out how to get him modeling jobs.”

This comment was met with an awkward, stunned silence. I am sure they weren’t morally opposed to child models. Their body language indicated my wife and I were deluded. It was as if we were saying we wanted to enter a cat into a rodeo. The teachers in the room were waiting for my wife to say, “Of course I’m kidding. Who would want to look at a picture of a Down syndrome kid?”

It took us a while, too long really to figure out what was going on.

As the days and weeks passed, we watched the short buses from school districts 20 and 40 miles away unload and load their charges and it occurred to us the customers were distant administrators watching their bottom lines and not nearby parents asking tough questions. My wife was constantly arriving at school to find our boy being cradled and coddled her queries marked her as a problem.

This was a place that specialized in managing children, not empowering them, and the best way to manage is to lower expectations. This discovery was no great feat of investigation, they told us as much. When we asked why his goals seemed so modest, we were told its best to set the bar low.

In the year we have known him, neither my wife nor I have been frustrated by something T. couldn’t do. Everything that frustrates us are things that every other child does that drive parents crazy.

We divide abilities into two categories: things T. can do and things he can’t do yet.

Maybe we’re setting ourselves up for disappointment if yet remains eternal. Maybe. But that still leaves all the moments of joy and I can’t imagine any of that ever getting old.

In the meantime, does anyone know a modeling agency? 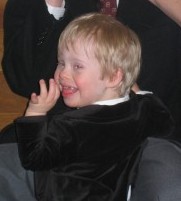