Who wants a typical kid? People don’t want their children to be typical; they want them to be extraordinary, smart, athletic – all of the above and more. No one imbues their son with a desire to be a mid-level manager or cradles their newborn daughter and thinks, “Chances are you’re not going to break any glass ceilings.”

No one wants a typical child, except parents who learn their children are atypical.

If you read any literature on raising a child with a handicap, there is much discussion about parents needing to come to terms with the diagnosis. The word “mourning” comes up a lot. On the surface such talk sounds a lot like self-pity or narcissism.

I don’t think that it. Most parents want the best for their kids, with the emphasis on “for their kids.” All parents worry about their children, no matter how typical or extraordinary they are. The things to worry about are infinite. You only have to think of your own childhood and the different life trajectories of classmates and acquaintances, sisters or cousins to wake up in a cold sweat.

A medical diagnosis displaces all those free-floating “what ifs?” with one big, concrete “what now?” The transition is not always graceful.

I also think there’s more than a little guilt as parents try to figure out what they did or did not do that could have contributed to their child’s condition.

I had a friend who died of leukemia a few years out of college. At one point well into his illness he had convinced himself the reason he was probably going to die at an early age was as a child, he slept with a nightlight. Maybe he was right. I was afraid he was going to drive himself crazy coming up with maybes.

But you can’t turn off the maybe machine.

I had been adamant the kid we would adopt would not have any profound disability. I was sure I wasn’t strong enough to handle such a challenge. Because I was so sure what our kid’s challenges wouldn’t be, my maybe machine was working non-stop with fears about what they would be.

When the social worker called and told us she had a kid with Down syndrome we should consider adopting, I was overcome by an overwhelming sense of peace.

The words “Down syndrome” worked like some sort of spell – in that instant I looked into the future and saw what my life would be like and I was O.K with it, giddy even. 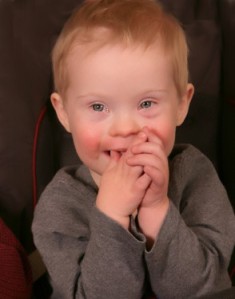 Some might say it was delusion, but I know it was clarity. My wife felt the same thing.

Our circumstances absolved my wife and I of any sense of mourning. We were not a party to whatever caused his diagnosis and no one would have thought poorly of us for waiting until a more typical kid became available.

Above all, we know we would never have found a child as extraordinary as T.

And that’s every parent’s dream.