Two months or so after T. moved into our home we attended an IEP (Individual Education Plan) meeting. Also in attendance were his DHHS adoption worker, his Guardian ad Litem, a combination of special education teachers, an OT (occupational therapist), a PT (physical therapist) and a speech therapist. In the course of the meeting we heard a lot about “typicals” – as in the typicals would see him at free play and, they would send a typical in to his classroom as a model for him and the others. If you send more than one typical in to a classroom they tend to stick together so it’s better to just send one. Theses typicals were important and for the life of me I couldn’t figure out who they were. I was nervous. I asked, “Who are these typicals?” I think to call it an awkward silence is too strong but a silence. Ward turned to me and said, “They’re the ones who don’t have Down syndrome.” Ah, I thought the typicals. There was murmuring and nods.

On the way home in the car – Ward said, “Isn’t that just typical.” To which I responded “Those poor bastard typicals.” And – it was another moment of understanding.

We are a family of atypicals. When we married I was two days shy of 47 and Ward was 33. We ended up adopt 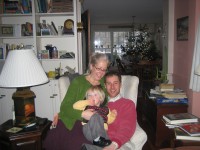 ing through DHHS a 3-year-old boy with Down syndrome in foster care. There are many beginnings to this story, a couple middles and more than more ending.

Two themes reinforce our atypical-ness through these eleven months. The first comes when people hear we’re adopting. The second comes when they see who we are adopting. When I say we are adopting I am almost always asked – “What country?” When I say, “Maine” I have been met with “Isn’t that nice.” Or “Really?” and even one “Yuck.” I cut that guy some slack because that might have been me at one point.

When people see who it is, they often say, “They are happy, aren’t they?” The first time – I was unbuckling T. from his car seat and a neighbor came up to me, looked in at him and said that. And – I knew immediately what he was saying. “They are happy, aren’t they?” I didn’t know what to say. Now I do. It’s a variation on a theme. Sometimes I say, “Well, if you saw him yesterday at 2:00 when he bounced a sippy cup off the dog’s head you might not agree.” Or, if I am feeling particularly full of myself I say “Paris Hilton is happy when she gets a new miniature pig. T. is evolved.” And that is the reality or at least our belief system. He is evolved. He is in the moment. Is that 3 or is it Down syndrome?

That’s part of what this blog is about.

9 thoughts on “Why atypical”